Following the tremendous success in their heat, our team of challengers were invited along to Duxford Imperial War Museum to take part in the final of the Cambridgeshire Year 5 Maths Challenge 2019. Over one hundred Cambridgeshire schools had taken part in the maths challenge and the thirty top-scoring teams were invited to attend the final. We are immensely proud of the team - well done to you all! 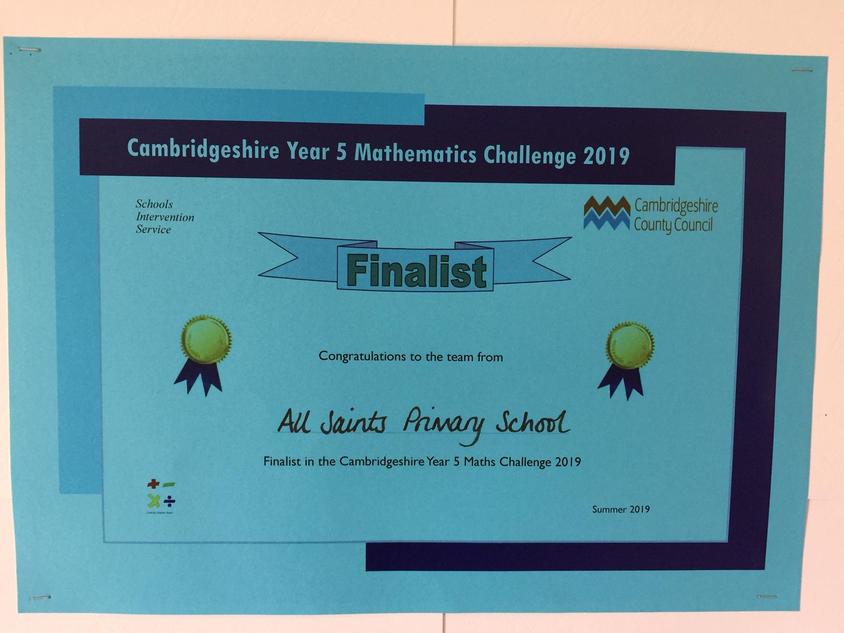 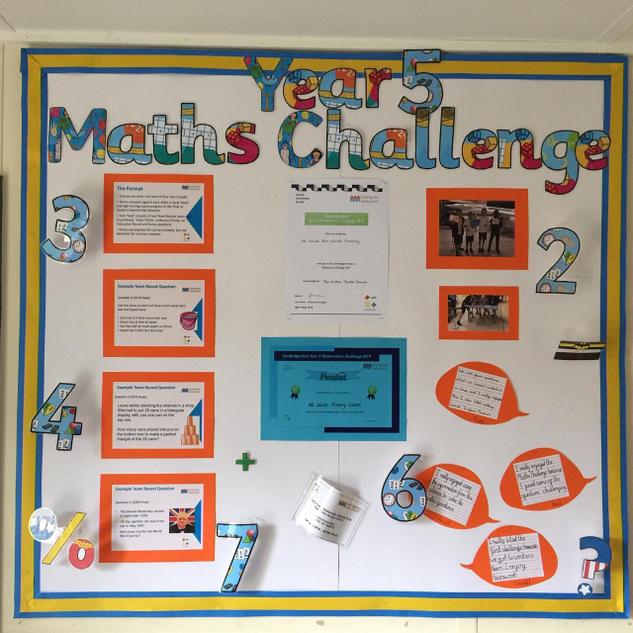 Congratulations to the members of the team who represented All Saints at the Cambridgeshire Year 5 Mathematics Challenge 2019!

Over the course of an hour and a half they answered some rather difficult maths questions and were awarded second place in the heat they took part in. They worked fantastically as a team and did especially well in the 'Extra Thinks' questions. Well done to all involved! 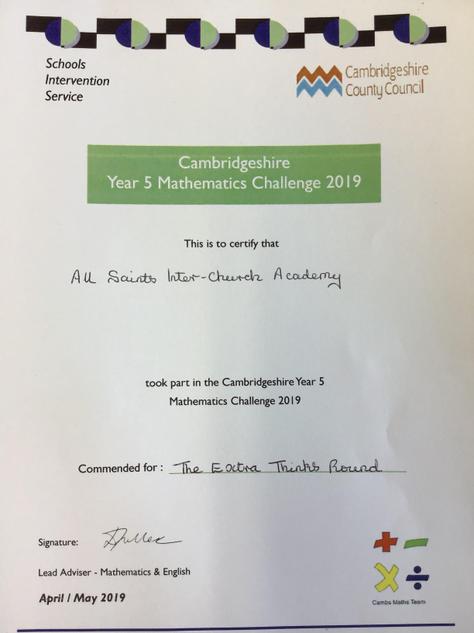 The principal focus of mathematics teaching in key stage 1 is to ensure that pupils develop confidence and mental fluency with whole numbers, counting and place value. This should involve working with numerals, words and the four operations, including with practical resources [for example, concrete objects and measuring tools]. At this stage, pupils should develop their ability to recognise, describe, draw, compare and sort different shapes and use the related vocabulary. Teaching should also involve using a range of measures to describe and compare different quantities such as length, mass, capacity/volume, time and money. By the end of year 2, pupils should know the number bonds to 20 and be precise in using and understanding place value. An emphasis on practice at this early stage will aid fluency. Pupils should read and spell mathematical vocabulary, at a level consistent with their increasing word reading and spelling knowledge at key stage 1.

The principal focus of mathematics teaching in lower key stage 2 is to ensure that pupils become increasingly fluent with whole numbers and the four operations, including number facts and the concept of place value. This should ensure that pupils develop efficient written and mental methods and perform calculations accurately with increasingly large whole numbers. At this stage, pupils should develop their ability to solve a range of problems, including with simple fractions and decimal place value. Teaching should also ensure that pupils draw with increasing accuracy and develop mathematical reasoning so they can analyse shapes and their properties, and confidently describe the relationships between them. It should ensure that they can use measuring instruments with accuracy and make connections between measure and number. By the end of year 4, pupils should have memorised their multiplication tables up to and including the 12 multiplication table and show precision and fluency in their work. Pupils should read and spell mathematical vocabulary correctly and confidently, using their growing word reading knowledge and their knowledge of spelling.

The principal focus of mathematics teaching in upper key stage 2 is to ensure that pupils extend their understanding of the number system and place value to include larger integers. This should develop the connections that pupils make between multiplication and division with fractions, decimals, percentages and ratio. At this stage, pupils should develop their ability to solve a wider range of problems, including increasingly complex properties of numbers and arithmetic, and problems demanding efficient written and mental methods of calculation. With this foundation in arithmetic, pupils are introduced to the language of algebra as a means for solving a variety of problems. Teaching in geometry and measures should consolidate and extend knowledge developed in number. Teaching should also ensure that pupils classify shapes with increasingly complex geometric properties and that they learn the vocabulary they need to describe them. By the end of year 6, pupils should be fluent in written methods for all four operations, including long multiplication and division, and in working with fractions, decimals and percentages. Pupils should read, spell and pronounce mathematical vocabulary correctly.

Unfortunately not the ones with chocolate chips.

Some cookies are necessary in order to make this website function correctly. These are set by default and whilst you can block or delete them by changing your browser settings, some functionality such as being able to log in to the website will not work if you do this. The necessary cookies set on this website are as follows:

Cookies that are not necessary to make the website work, but which enable additional functionality, can also be set. By default these cookies are disabled, but you can choose to enable them below: